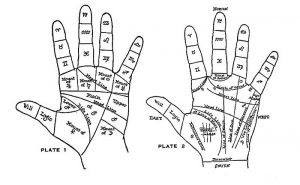 It is my purpose in this thesis, to show the correlation between the science of Astrology, and the sciences of Chirognomy and Chiromancy as the latter are combined and practiced in what is generally termed Palmistry.

Sepharial, in his “Phrenoscopy,” claims that Astrology and Phrenology provide the key to human character. I am going Sepharial one better. I hold to the theory that the organism, without and within, shows the operation of planetary forces which condition and impel the human, and the person who possesses the ability to read all the signs depicted thereon and therein, and who at the same time possesses a knowledge of the language of Astrology, holds the TRUE KEY to Human Character.

I want it understood in the beginning that I do not possess the ability to read all the signs by which character may be determined as they are depicted without and within the human organism. Indeed, I have mastered but a small portion of those, which are to be found on the hand. Such signs, however, I find to be a part of the tracings on the trestle-board of the individual, showing, for its own information, the forces which have worked to shape it to the thing it is, and informing it as to the method of procedure by which defects may be eliminated, imperfections corrected and improvement made by taking advantage of present opportunities for directing its forces in constructive channels. If Astrology and Phrenology have been found to furnish in part the Key to Character, is it not logical to assume that Astrology and Palmistry also furnish in PART the Key to Character, and one of far more practical value and advantage in use, so far as the individual practitioner is concerned, in as much as he or she may examine the individual hand more easily than the head?

I presume the majority of my readers are more or less acquainted with the language of both Astrology and Palmistry. There may be a few, however, who are ignorant of the terms employed and their meanings, and for that reason it will be necessary, before attempting a delineation to give a general review of the terminology of both sciences, and in doing so, I shall endeavor to correlate them.

According to data in hand, the twelve phalanges of the fingers correspond with the twelve signs of the Zodiac, as follows:

NOTE: Personally I consider Uranus and Neptune to be respectively the rulers of the signs Aquarius and Pisces.

It is deemed inadvisable in a thesis of this kind, to give in detail the nature and qualities of the Zodiacal signs, as it would require too much space. The student is referred to the Lessons in the Astrological Course of the Societas Rosicruciana in America, or to any standard Astrological textbook for such information.

I have not been able, thus far in my investigations, to correlate the qualities indicated by the several phalanges of the fingers with all the Zodiacal signs. Such as I have been able to correlate will be noted as we proceed.

According to data in hand, the ancient Astrologers based their calculations and delineations on the position and influence of Seven planets, i.e., Sun, Moon, Mercury, Venus, Mars, Jupiter and Saturn. I do not think the Palmist of the Old Time arbitrarily affixed the names of the planets to the mounts and fingers now bearing their names, but rather that they were so named because the Palmists, who in all probability belonged to the same School as did Astrologers, realized that the qualities manifested by the mounts and fingers were established and fixed by Nature, and were an expression of the powers and potencies of the evolving God Within, which powers and potencies are Cosmic, and apportioned to the individual by the Planetary Spirits, according to its needs.

Later on, we will note something of the influence of the planet Uranus as indicated on the hand, and also that of Neptune. Although Neptune is said to be outside our Solar System, it appears to me his influence is decidedly marked in the lives of many people.

The mounts of the hand to which have been affixed the names of the planets are SEVEN in number, (see Plate 1) and are located as follows: